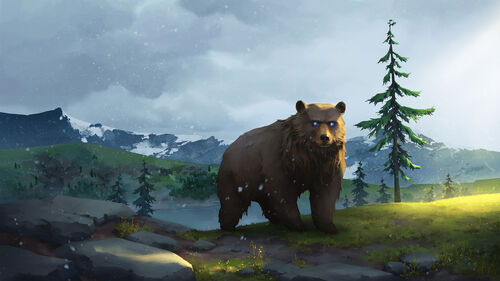 The Clan of the Bear. Stalwart protector of the land, the Clan of Bjarki is home to the most resilient warriors. Hailing from the northern reaches of the realm, they are also very well suited to survive the harsh winters of Northgard.

The Clan of the Bear is a balanced and adaptable clan. Late game Shield Bearers from this clan are a force to be reckoned with, especially if fighting during winter.

Shield Maiden in an area, increases local production by 15%.

+3 Fame per enemy unit killed in an area with the

Your Woodcutters will produce 20% more

Your non-sick clan members heal during winter in allied territory.

Fisherman's Huts can have one more

Fisherman, and their production is increased by 25%.

Protector of the Land

Happiness per area with at least one military camp.

Kröwns, and their resistance is increased by 5%. Shield Bearer Camps have no upkeep cost.

Food production loss is reduced by 50%,

Happiness is increased by 3 and

Trade Routes is increased by 50%.

Scabbard of Gram : Your Warchief wields the sword Gram. Enemies hit by Gram are frozen, along with the area around them. Gives +10% attack, +10% defense to Shield Maiden.