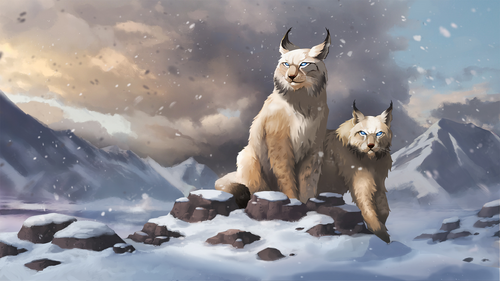 Led by Mielikki, the Beastmaster, the Clan of the Lynx have an exceptional connection with nature. Proud Hunters, their excellent archery skills and unique luring technique are more than enough to ensure the ongoing prosperity of their people.

The Clan adopted the graceful but threatening lynxes Brundr & Kaelinn when they were just cubs, who now serve as the eyes of the clans esteemed leader and a force to be reckoned with on the battlefield.

Unlock Mythical Lure for Mielikki. She can place a lure in a non enemy controlled zone, which will periodically attract Mythical animals. They come in higher numbers as time passes. The next

Unlock the Oskoreia ability for Mielikki. She can sacrifice herself to recall the last and strongest Mythical animals the clan killed. In their spirit form, they come back for a last rampage on earth.

Hunters' tool improvement is free and forging time is divided by 2.

Attack Power. While in the same zone as the Mythical Lure,

Mielikki can summon spectral beasts to follow her, depending on the number of mythical waves you have hunted.

Kröwns. Allows you to sell Hunting trophies in the Marketplace (2:1 ratio).

Glepnir : Allows you to place a trap in a non-enemy zone. Activate on demand to reveal spikes that damage and slow enemies for as long as they are in the zone. Lasts 30 seconds.