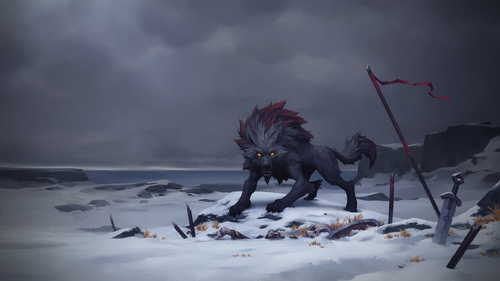 The Clan of the Wolf. Aggressive, protective of their freedom and more than a little reckless. They are well prepared to face the dangers of Northgard and use their combined might and mobility to leave little chance to all but the most resilient.

attack power while outside of friendly territory to Berserker's dominion ability.

Berserker can colonize cleared areas for free (every 12 months).

15% Attack bonus when fighting outside your territory.
Dominion cooldown is reduced by 50%.

Kröwns for each enemy unit killed.

When you decolonize an area, your units there gain +30% health.

Increases your military power against Defense Towers by 75%, and makes decolonization twice as fast.

Kröwns income by 75% if you have a

Berserker died at least once, -50%

Iron to recruit him again.

Horn of Managarm : Summons up to 3 White Wolves under your control for

50 Food each, with the cost being reduced by half if you build it in a Wolf Den tile. You can summon them every 2 months. 3 is the total maximum number; if you summon 3 wolves and lose 2 of them, next time the Horn of Managarm is off cooldown you will be able to summon only 2 wolves.

The larger your warband, the more

Happiness it brings to the clan - although with diminishing returns. Military units produce

Warchief counts as a military unit for the purpose of this bonus. White Wolves summoned by the Horn of Managarm, however, do not.

This is not an exhaustive table. Higher

Happiness than 8 is attainable, but the vast majority of matches will not see warband sizes larger than 21, and so it hasn't been tested beyond that.

In the story campaign, Fenrir clan made their debut as ally for Rig led by a ruthless and impetuous young berserker named Egil. He craves for glory from battles which contrasted to more pacifistic and wiser Halvard, so much that Brand and Halvar dismayed that Egil more focused on combating their common enemy rather than selfless alliance against their common enemy. While appeared to be reckless, he makes up his shortcomings by swiftly adapting to any situations before him and against blindly attacking enemies head on.