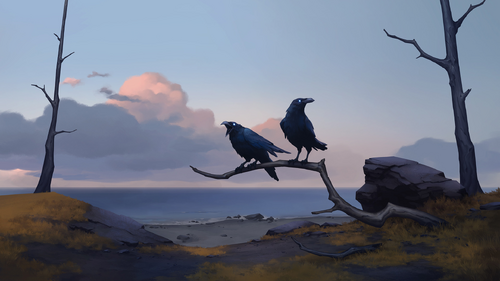 The Clan of the Raven. Great explorers and merchants, their mighty fleet allowed them to be the first to land on Northgard. They are strong trade partners if you don't mind their constant scheming. Brash and swift, they will often be found roaming where you least expect them.

Kröwns and Harbors play central roles for this clan. Money can be produced excessively, while tasks like colonization and exploration can simply be paid for, giving this clan a big edge by spending a less vital resource.

Happiness will rarely be an issue with Harbors and explored areas providing plenty and a wealthy military becomes nearly unstoppable.

Harbor and send them to raid coastal areas without a

Town Hall on it. Upgrades for your raids are available at the

Forge. Allows to trade with your Homeland at better rates.

You can send your [Mercenary]s to coastal zones with a

Town Hall. More upgrades for your raids are available at the

Forge. You can assign 3 more

Increases your scouting and exploration speed by 100%. Your

Food and cannot be hurt while exploring.

Happiness based on the areas you have explored (+0.75

Naglfar : Allows you to send two Son of Hrymr to raid coastal tiles.