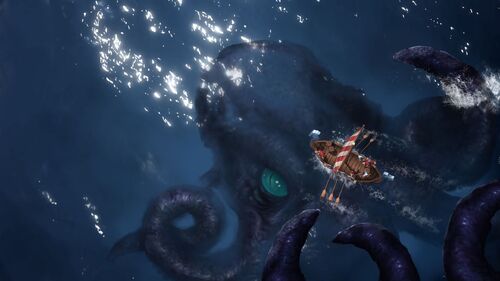 The Clan of the Kraken knows firsthand how dangerous the sea can be. They worship the gigantic Creature, fearing its brutal might, honoring its instinctual knowledge, and using its powers when he deigns to bestow them.

The clan's capacity to thrive is tied to the terrain because of its penalties on non-coastal areas. However, with enough access to shores, kraken benefit from fisheries producing good and stable

food income, which can easily be sold for

Wyrd, can be scarce at the beginning but will become more abundant as the settlement extends. With high levels of

Happiness thanks to the

Norns and its military Knowledges, the Clan of the Kraken will be able to, in the later stages of the game, summon vast armies that can eventually be reinforced by a

400 Wyrd.
You are warned of events long before they happen (~5 months).
During the

attack of the kraken event, your clan is

unhappiness to the zone controller.

Valkyrie appears at your Town Hall. You can control 1 more

Kröwns.
Reveals the position of all neutral factions (without removing the fog of war).
All

Trade Routes give you +3

Near The Sea Spirit

Wyrd for every 3 buildings on coastal zones.

Edda of Vör : Allows your Norns to earn

Fame, at a rate of

Given by Vör, wise and curious, so that no one can hide anything from her.