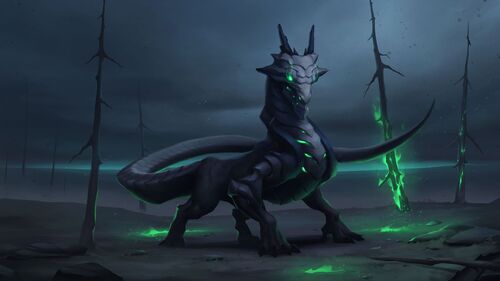 The Clan of the Dragon. The most outlandish of all clans, the Dragons follow ancient customs and embrace freakish traditions. They use sacrifice and slavery to further their goals, often earning the other clans' distrust.

Provided proper population management, the clan possess the capacity to grow very strong as the game goes on while early expansion is also facilitated. The ability to recruit

Dragonkin makes the draconic warband one of the fiercest. To sustain this costly army,

Slaves can either be used as an economic advantage or feed the dragon gauge by sacrificing them. The essence gauge grants constant and increasing bonuses as

Dragon Essence gauge is extended, and bonuses are increased.

Dragon Essence gauge is complete, and bonuses are increased.

Dragon Essence is a resource exclusive to the Clan of the Dragon. Sacrificing units at the Sacrificial Pyre will earn Dragon Essence that can be used to unlock various bonuses on the Dragon Essence gauge. Each Fame step will improve the available bonuses and unlock additional parts of the gauge.

Thralls can be conscripted to production buildings to increase their output (maximum of 1 per building).

You can assign 2 extra

+100% attack power for a military unit with no other military allies in their zone.

Thralls. Chance of capture is multiplied by 2 if your

Warchief is in the zone.

Thralls are 50% cheaper, and minimum price is also reduced by 50%.

Skull of Hrungnir : Allows you to summon an Undead Giant.

There is a 10% chance to capture a wounded unit on each attack. This chance is doubled if warchief is in the area.