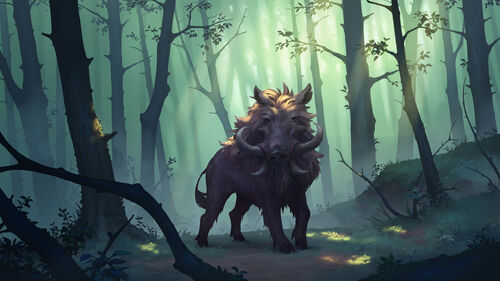 The Clan of the Boar. A reclusive clan once forgotten by their brethren but recently rediscovered, the Clan of the Boar is both mystical and untamed. Their understanding of the world is unmatched, as are their boorish and primitive ways.

Clan of the Boar excels at gathering lore points and is less dependent on stone. They also receive greater benefit from the Altar of Kings and forest tiles.

Note: Trade routes are disabled for the Boar clan.

You gain one free Knowledge, this does not count toward a Lore Victory or Blessing unlock.

All blessings have upgraded effects:

Happiness and production yields from

Lay of the Land

Reduces environment hostility by 70%. Increases non-villager productions by 10% in Forests, Swamps or Lakes.

Neutral factions will accept any resources and you gain +1

Happiness when trading with them. Trade routes with neutral factions earn you +20% more

Happiness for every 3 colonized zones. Zones with Forests, Swamps or Lakes provide 1

Lore to summon one

Giant Boar. It is controllable as long as it is not in combat.

In the story campaign, Boar Clan are originally led by Hvedrung, the one who masterminded the murder on Rig's father and massacre of entire Stag Clan. By the time the truth came out, Boar Clan had an uprising led by Svarn who made an ally with Rig against their common enemy.

A small faction of the clan who allies with Rig led by Svarn. A taciturn spiritual leader, Svarn is a sage and warrior who lives a simple life, close to nature and in accordance with the Old Ways. Svarn is the one who revealed the bigger plot to Rig behind latter's clan's massacre and theft of Regal Horn.

Main branch of Boar Clan led by the ruthless and proud Hvedrung, the mastermind behind the Stag Clan massacre. Hvedrung sends Hagen to slaughter Rig, along with his family and clan to get his hands on the Regal Horn and preventing them from becoming a future threat. Hvedrung seemed to have foreseen Rig and his followers' survival as he proudly reveled in his crimes and taunted him for his obliviousness to the Regal Horn's true purpose. He intended to destroy Bifrost and bring forth Ragnarok with the help of the Regal Horn, which was later revealed to be Gjallhorn.

Hvedrung was finally defeated by Rig, but chose to face his last moments by telling that in spite of Bifrost being saved, he caused enough damage which resulted in the Great Tree Yggdrasil to shudder, and thus Ragnarok already began. The revelation sapped whatever rage that boiled Rig's heart that he lost the drive to avenge his father in that instant. It's unknown what happened to Hvedrung afterwards, as he presumably either was left to die or was incarcerated for his crimes.