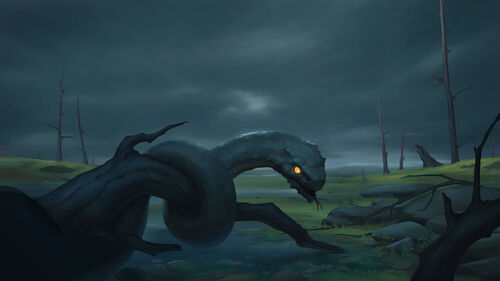 The Clan of the Snake. Cunning and deceitful, the Snake has little regard for fame or honor. Members of the clan prefer working in the shadows and using guerilla tactics rather than open warfare.

This Clan benefits from harassment tactics and an aggressive hit and run playstyle. Additionally, the Stolen Lore allows adaptability for otherwise adverse situations.

Steals a Lore from another clan, replacing this slot with one of the following lores:

Food for each military unit in a non allied zone next to or within an enemy territory.
Increases the

Skirmishers are less affected by the attack penalty from their distance to Town Hall.

Permanently increases your military units' attack power by +1% for any unit slain or lost in enemy territory (30% max).

Kröwns when trading with enemy clans, deteriorating diplomatic relations. You can trade even when at war. Enemy clans get no resource from black market trading.

Ruins or Shipwrecks in your territory provide +2

Gungnir : All military units get 10% dodge chance. Unlocks the

Stealth ability for all your military units.